Her kidnappers gave her the name Bakhita, meaning “fortunate.” Her life in captivity wasn’t quite so. Born in Darfur in 1869, Josephine Bakhita was taken by Arab slave traders when she was 9. Forced to walk 600 miles to southern Sudan, she was bought and sold before arriving in El Obeid. But of all the indignities Josephine faced as a slave—far too many to mention here—one in particular stands out.

Through a combination of branding and tattooing, Josephine suffered the traditional Sudanese practice where a pattern was cut into her skin with a razor. To ensure scarification, salt was poured into the open wounds. When it was finished, 140 intricate patterns were carved into her breast, torso, and arm. She also faced countless beatings and lashings from a revolving door of owners as well as a forced conversion to Islam.

Left by her owner in the custody of the Daughters of Charity in Venice in 1888, Josephine finally found refuge. Baptized in 1890, she took her final vows in 1896, and spent the rest of her life in Vicenza as a doorkeeper and cook. She died in 1947. Beatified in 1992, she was canonized by Pope John Paul II eight years later.

Josephine did not live to see the second half of the 20th century, but many of the social ills she endured outlived her. In a month where we recognize and celebrate not only African Americans in our country, but the feast day of St. Josephine, we as Catholics can learn quite a bit from the Sudanese saint.

Forgiveness. Josephine endured unimaginable hardships in her life, but she showed mercy. “If I were to meet the slave traders who kidnapped me and even those who tortured me,” she once said, “I would kneel and kiss their hands, for if that did not happen, I would not be a Christian and religious today. The Lord has loved me so much. We must love everyone.” In the face of inhuman trials, she only saw the face of Christ.

Identity. Josephine’s abduction was so singularly traumatic, she later recounted, that she forgot her birthname. Saddled with the ironic Bakhita, she nonetheless grew into her new moniker, and found spiritual fortune in her true identity as a child of God.

Diversity. According to a 2017 study by the US Conference of Catholic Bishops, there are 3 million black Catholics in the United States. By 2050, the African American population is expected to double—and parishes across the country will surely reflect that diversity. Josephine, a model for Catholics of any color, proved that diverse faith communities are the strongest.

Freedom. In a recent report, the National Center for Missing and Exploited Children found that one in six endangered run-aways has likely been trafficked. Globally, the statistics are worse. The International Labor Organization estimates that there are 4.5 million exploited sexually—and those numbers are rising. Taken from her family and trafficked, Josephine found physical freedom in an Italian convent and spiritual freedom in God. Today, she is considered a kindred spirit to those who are trafficked worldwide.

Faith. In her years as a doorkeeper, Josephine exuded unshakable grace. The people of Vicenza warmed to her quickly, calling her “black mother.” Though she carried the physical and psychological scarring of her years as a Sudanese slave, she never lost her faith. “O Lord,” she once said, “if I could fly to my people and tell them of your goodness at the top of my voice, oh how many souls would be won!” After she died, it was written that her mind was always fixed on God, while her heart was still in Africa. Josephine showed what can be overcome when we hold to our faith.

During Josephine’s years as doorkeeper, Italians were taken by her cheerful demeanor. But the horrors of slavery troubled her the rest of her life. Her final years were marred by sickness. In a fevered state, she once pleaded with a nurse to loosen the chains that bound her wrists. But she never lost her belief in God. When visitors asked how she was feeling, Josephine’s token response to them was, “As the Master desires.”

That total abandonment to God would be Josephine’s legacy—and it is one we can work toward as 21st-century Catholics. In this season of Lent, in this month of recognizing our African American brothers and sisters, these words from Pope John Paul II, who beatified her, ring true: “God used [Josephine] to teach us all the meaning of Jesus’ words: ‘Blessed are the peacemakers, for they shall be called children of God.’” 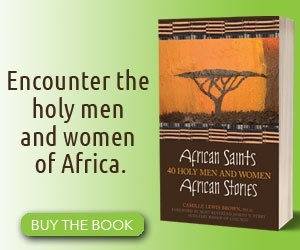