When I was a young man, I took a trip to the Grand Canyon and rode from the top to the basin on a mule. We reached the bottom in the late afternoon. I had supper, a really good cup of coffee, and I strolled by the Colorado River.

There’s something unique about watching the sunset from there at the bottom. You’re looking up the canyon wall and, high above, the sun drops lower and lower. Then the sun is gone. You move from light to shadow in a heartbeat. In the space of a breath, the summer air goes cold.

This past February, I sat with grief. I have done this every February for 10 years since my mother passed away in 2009. It was sudden and unexpected, and has hung heavy with me ever since. My mother’s name was Ann. She was an atheist. She was also an alcoholic and battled addiction for most of her life. These were the shadows that cut across her canyon, deep into the darkness.

But there was sunlight too. She was an architect and an artist. The town where I grew up is marked, north to south, with houses and buildings that came out of her mind and were locked onto the earth. People lived in them, and business happened in them. Her mind did that.

We had a complex relationship. She raised me as a single parent, but once I became an adult we went several years without speaking. We had strong personalities, and each had gravities that made things treacherous when our orbits got too close. And yet . . .

I have a memory of standing at her shoulder as she drew lines along the straightedge. I would have been 7 or 8, before all hell broke loose in our relationship. It was the floor plan of a building.

A few weeks later, I am with her at the building site. A skeleton of pine wood has grown up from the slab. The smell of sawdust and stale cigarette smoke mixes with the cool of the concrete slab, and I wander the maze of the floor plan I saw on her drawing board just weeks before.

I had been to enough building sites to know these bones would soon be thick with windows and gypsum board. So I take a step, and I walk between two pine studs. Silver junction boxes and a rough stairway are in the distance, and here I just walked through a wall.

As distant as we became, my mother and I found a way back to each other in the years before she died. I had found my way to Christian faith, and eventually to Catholicism. My mother had found her way to a sobriety of her own sort, but her world had also grown very small.

We kept in touch mostly by phone. The last time I saw her, I was surprised. Her hair, so long dyed, had become a shock of white. She was thin in the face and short of breath. She looked old. But, at the same time, she was flint and steel. Our conversation was probing and angular, as I remembered.

This last visit was also the time she met my wife. She had not come to the wedding, not from spite, but because her world had become that tight and small. She was living in a house packed floor to ceiling with things she had collected through the years and could not bear to let go. She had cardboard on the windows. She had her reasons for this, but I think they had more to do with threats long dead than anything in her life at the time—though that is not for me to say, in the end.

I learned that from her too. 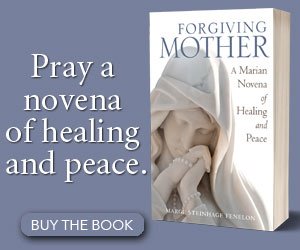