Through the Door of the Dead with Clare of Assisi

In addition to spiritual resources, Franciscan Media publishes inspirational Christian fiction. Below is an excerpt from The Mystery at Midnight, a novel for children ages 7-10 by Lisa M. Hendey. In this tale, a modern-day girl named Katie travels through time to meet Clare of Assisi just as she decides to leave her family and commit her life to Christ.

The footsteps of the night watchman were so close, she thought she could hear his ragged breathing. Behind him, two other guards joined the chase yelling, “Lady Chiara’s room is empty! We have sent for Monaldo! Ring the alarm!”

But Clare turned toward the creepy door, made the Sign of the Cross, then grabbed the knob and turned it. As she did this, she threw the weight of her body against the Door of the Dead.

Somehow, as the last midnight chime tolled, the door opened with a heavy creaking sound.

Angelica the cat slid through the slender crack and into the darkness. Katie, Clare, and Bona followed the cat, squeezing through the narrow opening. Once they were outside, Katie’s heart thumped with fear. Immediately, the heavy door slammed behind them. As they ran from the huge house, they heard the guards trying to open the massive door.

“Open the door, you fools!” the watchman yelled.

“We’re trying!” the guards answered. They pounded and yelled with frustration as they tried with all their might to reopen it.

Katie, Clare, and Bona ran across the big piazza in front of the cathedral, then through a series of dark, winding stone streets. Katie moved forward with no idea where she was going. She kept her eyes on Angelica’s tail and Clare’s swaying blonde hair, praying that they would be safe. She ran as fast as she’d ever run.

As the voices of the guards faded behind them, Katie stopped feeling afraid. She loved the feel of the blustery wind on her face. Her legs were strong as she ran through the olive tree forest that surrounded Assisi. Soon, they saw lights ahead of them.

Clare ran toward the small group of men holding flaming torches and wearing long robes. Finally, she slowed to a stop. Katie, Bona, and Angelica stood behind her.

“Peace and all good!” said one of the men, coming forward to welcome Clare.

“Grazie! Thank you.” Clare curtseyed before him. “I have come to live as you do, as the Gospel calls us to live.”

Then turning to Katie, Clare said, “Katie, this is Brother Francis!”

Katie froze, looking at the dark-haired man in the long robe. Francis of Assisi! He didn’t really look like the image in the stained-glass window at St. Anne’s, but he somehow still looked exactly like she had pictured him. Especially his eyes, which were full of kindness. He smiled at her and nodded his head in greeting. Katie had so many questions for him!

But now wasn’t the right time. This was Clare’s time. Katie held her questions inside. They followed Francis and his brothers into a small, grey stone chapel.

Katie looked around the dark space.

“We call this the Portiuncula, a little place that was given to us for our work,” Francis said.

Then he shared a few quiet words to Clare. Katie watched as Clare’s eyes filled with tears. She pulled her hair over her shoulder, holding it in both her hands as she spoke with the priest. He touched her cheek lightly with the back of his fingers, and she finally nodded and turned away from Francis to face the crucifix. With her back to him, she pulled the green ribbon free, brushed her blonde hair behind her shoulders, and lifted her eyes to the cross. Clare shivered and wiped away the tears on her cheeks.

Francis took a small knife from one of the brothers. He lifted Clare’s beautiful blonde hair and began to cut it. Katie gasped. Long blonde strands fell to the floor. Katie felt like she might cry too, but was determined to be strong for her friend. For Clare, there was no turning back. Cutting her hair was a sign that she was giving up her old life to begin a new one.

After all of Clare’s long locks had been removed, leaving her hair as short as a boy’s, Francis handed her a pile of cloth and a piece of rope. Clare left with Bona and went to a shadowy corner of the chapel. When they returned, Clare no longer wore her beautiful gown. Instead, she had on the rough grey robe with a white knotted belt. With her short hair and bare feet, she was almost unrecognizable.

The brothers welcomed Clare with smiles and quiet words. After a moment, Francis stepped forward again.

“Your lives are in danger!” Francis said to Clare. “Your father will not rest until he has returned you to Assisi! We must take you away from here. I’ve made a plan to keep you safe. But we must go now!”

“You lead the way, Brother Francis,” Clare said, her voice growing stronger, “and I will follow.”

As they turned to leave the chapel, Katie paused. She knelt for a minute and touched the beautiful green silk ribbon that was shining in the middle of the pile of long blonde hair on the floor. “She really did it,” Katie whispered to Angelica.

Then she took off running after Francis and Clare.

Excerpted from The Mystery at Midnight, part of the Chime Travelers series of books by Lisa M. Hendey. To learn more, click the image below. 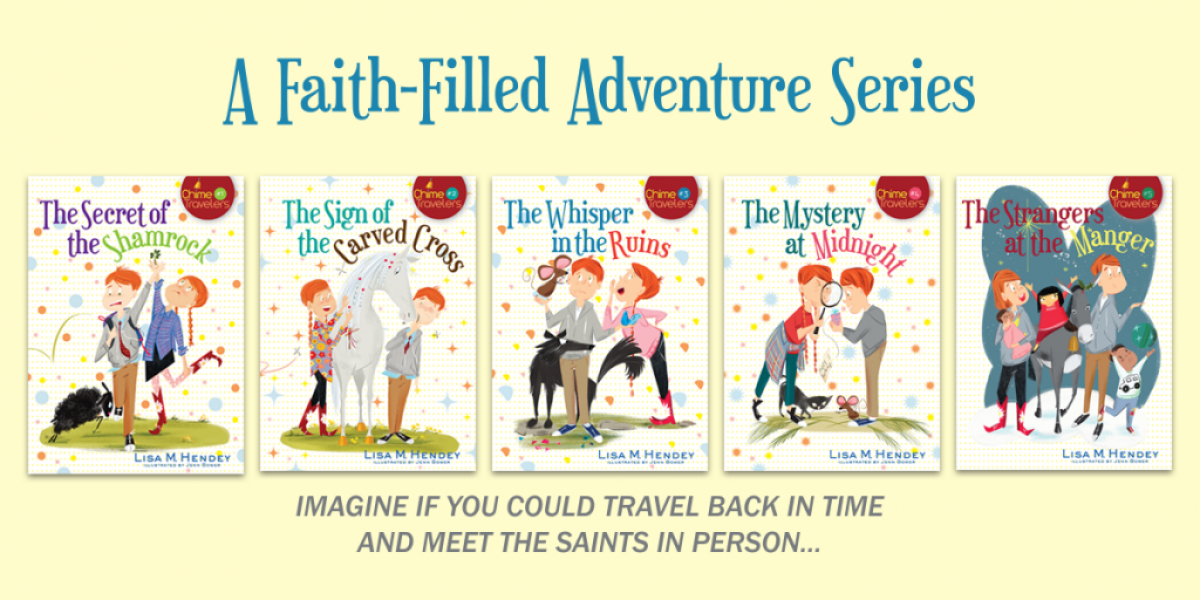