The Way of the Cross: A Meditation for Lent

We come to walk with you, Jesus, confident that following your journey to the cross will lead us closer to God’s loving heart. In your bruised face and wounded body, we have a powerful image of God’s extraordinary care for us. Saints like Francis of Assisi shed streams of tears as they contemplated the amazing outpouring of God’s love.

First Station: Jesus is condemned to death. Jesus’ way of life put him on a collision course with the powerful and mighty of his day. His “crime” was to take seriously the mission described in Isaiah: “The Spirit of the Lord has anointed me to bring glad tidings to the poor….to proclaim liberty to captives and recovery of sight to the blind, to let the oppressed go free…” (61:1). Jesus’ challenge to those in positions of power led to his condemnation.

Second Station: Jesus accepts his cross. Jesus must now carry the instrument of torture through the streets of Jerusalem. Some future day—because of his ultimate triumph over death—Jesus cross will become a badge of glory. But on Good Friday itself—for Jesus the convicted criminal—the cross was a badge of shame. Yet in loving fidelity to his Father’s plan and out of compassion for humanity, he accepts this huge challenge. Help us, Jesus, to walk in the same Spirit!

Third Station: Jesus falls the first time. Weakened by torture and fatigue, Jesus collapses under the cross. Now the “God-man” fully tastes the frailty and poverty of the human condition. He shares the helplessness of those who come face-to-face with their own human limitations: the spouse who helplessly watches a wife or husband die of cancer; a youth overwhelmed by divorce in the family; a human rights worker sitting 10 years in a prison for a cause that seems doomed.

Fourth Station: Jesus meets his sorrowful mother. What do their eyes say as they look at each other, this mother and son meeting on the Savior’s death march? Love certainly shines in the eyes of both—and a deep faith that God is present in their struggles. God throws down the rulers from their thrones but lifts up the lowly (Luke 1:52). Mary’s loving eyes assure Jesus of this. Even though she would like to run away from this heart-piercing moment, Mary is fully present to Jesus. She walks in solidarity with him and with all her oppressed children.

Fifth Station: Simon helps Jesus carry the cross. Jesus is encouraged by another human being. We are reminded of Jesus’ own words that care shown to others, even strangers, is care shown to Christ. When we feed or shelter another woman or man, we are doing the same for Christ. When we visit someone who is sick, we are showing a similar kindness to Christ. When we struggle to change unjust social structures—such as racism, sexism and other forms of oppression—we help alleviate the suffering of Christ in millions of others.

Sixth Station: Veronica wipes the face of Jesus. Veronica steps forward to gently press her veil to the bleeding and dirty face of this convicted outcast. What will people say? Won’t they link her with the rejects, lawbreakers and those living on the fringes of society? Yet, she will not be intimidated. She sees profound dignity even in the disfigured face of this condemned man. She rejects the standards of this world which see only the rich and glamorous as worthy of attention. In the faces of the poor and the downtrodden, she sees the very face of God.

Seventh Station: Jesus falls the second time. The cross that Jesus carries and which once more crushes him to the ground is the ugly burden of the sins of many. Jesus would not be on his way to a cruel death, if Pilate had been less self-seeking, if religious leaders had been less envious, if Peter had been less cowardly or if the whole human race, from Adam and Eve to you and me, had been more open to God’s grace. It is we human beings acting contrary to God’s will—not God—who are responsible for so much of the suffering and poverty of this world. 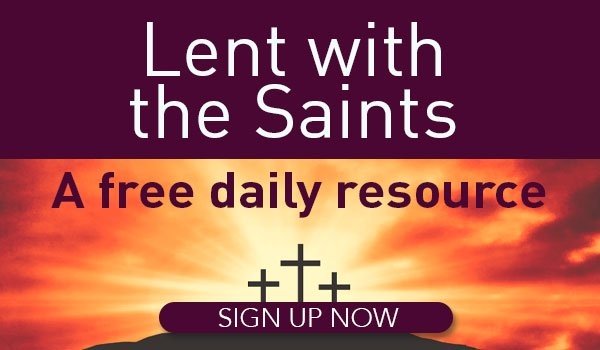 Eighth Station: Jesus speaks to the weeping women. The weeping women who follow Jesus remind us of the courageous role of many women during Jesus’ passion. It is a role many women bore throughout the centuries, in a world and a Church that has too often not welcomed their contributions. Jesus is less concerned about justifying his innocence than about being sensitive to the plight of the weeping women. He wants all persons to reach full potential as human beings created in God’s image. That is an important part of his mission—and of ours too.

Ninth Station: Jesus falls the third time. We understand these moments of defeat. We know how hard it is to get up some mornings to face work or school, especially when severe challenges await us. We may face family problems, addiction or perhaps we can not resign ourselves to some deep personal loss or failure. It is the dark night of the soul. Facedown on the ground, we remember that God’s Spirit is in us. And drinking deeply of it, like Jesus, we choose to be faithful to the end.

Tenth Station: Jesus is stripped of his garments. Jesus' clothes are torn from him. This irreverence is not simply against his body but against the sacredness, integrity and privacy of his inner person. In a sense, he is stripped of his human dignity. It’s not unlike being a victim of human exploitation or perhaps of sexual abuse. In a deeper sense, however, Jesus’ dignity does not depend upon the quality of his clothing or upon the decisions of those who would exploit him, but upon God. He stands before his persecutors with a dignity and grandeur that no one can take away.

Eleventh Station: Jesus is nailed to the cross. Because of Jesus’ incredible brand of mercy, the very nails that we drive into his hands and feet are driving away our guilt. Jesus really lived his teachings about forgiveness: “Love your enemies and pray for those who persecute you” (Matthew 6:44). “Do good to those who hate you” (Luke 6:27). Jesus’ love is so pure and generous that he seeks only to build up others, no matter what they do to him. If someone throws a lance into his heart, he wants the blood flowing from it to wash away that person’s sin. Perhaps Jesus greatest gift to us is his forgiveness. For without it we are locked in permanent alienation from God and from each other.

Twelth Station: Jesus dies on the cross. As he dies on the cross, Jesus shares the desolation of countless people who see their dreams collapsing before them. He feels abandoned, even by God. But in the end he dies the way he lived—with total trust in his Father’s love. Out of the darkness of defeat comes the world’s redemption. We can already proclaim the good news: “Lord, by your cross and resurrection, you have set us free. You are the Savior of the world.” Even though the world will not be completely healed and reconciled within history, but only when Christ comes again, Jesus has broken the hold of sin and death over us. And our liberation has begun!

Thirteenth Station: Jesus is taken down from the cross. The lifeless, battered body of Jesus is lowered into Mary’s arms. This human shell had contained the most honorable life that ever lived. With Mary we can confidently proclaim, “The Mighty One…has thrown down the rulers from their thrones and has lifted up the lowly” (Luke 1:52). It has been said, “We can take from this life, nothing that we have selfishly gained—the illusory trappings of status, power or wealth—only what we have given.” And Jesus has given the most of all: a whole life dedicated to healing people and honoring his Father.

Fourteenth Station: Jesus is laid into the tomb. Though the body of Jesus has been placed into a tomb, we know that his saving work has not been stopped. On the contrary, in three days God will raise him up in glory, and he will go before us into Galilee and every place where his mission is to flourish. We can embrace no greater challenge than to plunge into the mission of the risen Lord and be witnesses of his liberating presence in our world.

Lord Jesus, the same power of God which has raised you to new life raises us also, especially during Lent. We believe that you remain with us always, completing your mission with our help and through the power of your Holy Spirit.