The Sacred Scriptures ... are most fittingly likened to a honeycomb, for while in the simplicity of their language they seem dry, within they are filled with sweetness. —Hugh of St. Victor, Didascalicon


Everybody enjoys a good love story, particularly if it is romantic and has a happy ending. This fact helps explain why, month after month, Hollywood and television networks produce more and more romantic and situation comedies. It might also explain the popularity of the cable network TLC’s programs A Wedding Story and A Baby Story. This truth also sheds some light on why couples are asked by every new person they encounter to “tell their story” (How did you two meet?).

We simply take great joy in the personal narrative of others and the stories of their relationships. Perhaps this is why reading the love letters of others is so fascinating. In the introduction to his book e 50 Greatest Love Letters of All Time, a collection of romantic and touching correspondence between some of the greatest historical figures of the last several centuries, David Lowenhertz writes, “Sometimes nothing speaks louder than a silent word written on a piece of paper.” He goes on to explain that the act of writing, unlike some of our more speedy forms of communication today, offers those communicating the chance to reflect on the ways in which they wish to express the secrets of their hearts. To receive a love letter, a deeply touching and reflective expression of someone’s true feelings for you and the description of your relationship that is contained in that letter, speaks to our hearts in indescribable ways. I don’t believe that there is a more revealing way to understand one’s story than through love letters.

A large part of my book has been dedicated to inviting you to imagine your relationship with God anew, to consider your prayer as a way of being-in-the-world, to set aside time for God by making a space for solitude and for committing yourself to a more contemplative life that challenges you to see the world in a new way. This, it has been suggested, comes with a renewed approach to Franciscan spirituality, an approach that models our conceptualization of our relationships with God as being like dating. To achieve this aim, it has been necessary to reconsider terms and images we’ve often associated with other definitions or meanings. Such is the case with Scripture.

Oral tradition is the source of Scripture’s content, rooted of course in the Spirit’s divine inspiration. Long before there was the written book of Genesis, the people of Israel spoke the truth of God’s creative action and embrace of the world in language now recognizable as the beginning of the Hebrew Scriptures. One might imagine children and parents gathered around a small community’s wisdom figure to hear about how the world came to be, to hear why human beings at times make bad choices and fall short of their potential, or to hear about God’s personal covenant with humanity. 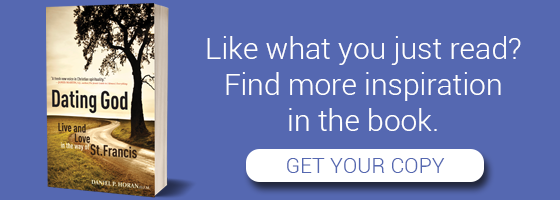 Those gathered together to share the collective story of God’s love for creation might hear how God revealed to Moses God’s very name, a name so holy it should not be said. A name signified by four letters, YHWH, which will come to be translated centuries later as “I am.” But the hearers of this story would understand the complexities and richness of God’s name, which is eventually lost in translation.

It is a name that describes God, not limiting God as the more philosophical reading of “I am” so often does. A more accurate rendering of God’s name in translation reads: “I am the one who will be there for you.”

It bespeaks relationship and future. It tells in miniature the whole story of God’s relationship with humanity and all creation. When Moses goes to the pharaoh on behalf of God’s people, he is to say that he is sent by the One who journeys with the chosen people. We see this in the often overlooked next verse in the book of Exodus, where, in another, more relational way, God explains to Moses who God is.

God also said to Moses, ‘Thus you shall say to the Israelites, “The Lord, the God of your ancestors, the God of Abraham, the God of Isaac, and the God of Jacob, has sent me to you”: This is my name for ever, and this my title for all generations. (Exodus 3:15) The name of God is precisely who God is, a God who is with us, who loves us and who will be there for us. is is made even clearer in the next line as God continues to speak to Moses.

Go and assemble the elders of Israel, and say to them, “The Lord, the God of your ancestors, the God of Abraham, of Isaac, and of Jacob, has appeared to me, saying: I have given heed to you and to what has been done to you in Egypt. I declare that I will bring you up out of the misery of Egypt, to the land of the Canaanites, the Hittites, the Amorites, the Perizzites, the Hivites, and the Jebusites, a land flowing with milk and honey.” (Exodus 3:16–17)

When we don’t just stop with “I am” but read on to hear God explain who God is to Moses, we come to see that God is concerned about us and the way we are treated. God is not some abstract deity but a creator who is head-over-heels in love with humanity and seeks what is best for creation out of that love and concern.

This is not the case in these three verses in Exodus but throughout all of Scripture. In both powerful and at times more subtle ways, God reveals who God is through Scripture, which is why we call it revelation. Revelation, at the most fundamental level, means relationship. When we talk about revelation we are always already talking about a speaker and a hearer. Someone must do the “revealing” or self-disclose, and another must be the “receiver” or hearer of that word.

To talk about Scripture as divine revelation is to talk about a historical and religious text that mediates that ongoing relationship between the revealer (God) and the receiver (all of humanity). In other words, Scripture isn’t just a book full of information one can consult, like a dictionary or an encyclopedia (or Wikipedia, for that matter), nor is it a history book or some work of fiction. It is the medium by which God’s revelation or self-disclosure is passed down from one generation to the next.

If prayer is relationship, the dynamic communication of one’s self to God, then Scripture might be something like love letters from God. Just as one person passes on, in an historical, tangible way, his or her feelings for the person he or she is dating so too the Christian community passes on the stories of the community’s experience of God in an historical and tangible way. Just as you can come to know much about the relationship between two people by reading their love letters, so too we can learn a lot about our relationship with God and the history of that experience through Scripture. Just as there are a variety of forms such communication can take between those dating (poetry, art, prose, laundry lists of information, journals, and so on), so, too, Scripture conveys the experience of relationship with God in manifold ways.

Although the metaphor is less than perfect—as all metaphors for describing and relating to God are—viewing Scripture as “love letters from God” causes us to pause and reconsider the significance of the Bible in our personal and communal lives of faith. Have you ever thought of Scripture as a way to get to know God better? Or, has Scripture largely been a combination history/rule book? Thinking about the Word of God in terms of “love letters” personalizes Scripture in a way that draws us closer to what those earliest storytellers of the faith sought to express: God is the One who will be there for us, is concerned about us, and loves us. That’s God’s name, after all!